Monkey for Sale at Springwood Honda in Springwood, QLD | Specifications and Review Information

Everyone loves the Honda Monkey. The original Monkey was a 1960's hit; add a few decades of evolution, throw in a couple of bananas and you get Honda's genuinely iconic mini-bike re-imagined for the present day. With styling that draws heavily on the original, complemented by modern, premium touches such as USD forks, twin rear shocks, LCD instruments, IMU-based ABS, and full LED lighting. Wet weight is a mere 107kg. The Monkey was so much fun and so easy to ride, it did more to sell the concept of motorcycles to a wider public than perhaps any other machine. With its chunky tires, mini-'ape' style handlebars, minuscule fuel tank, and big, squashy seat - the Monkey look is unmistakably of its time, but - just like the affection in which it is held - also timeless. Who doesn't want a pocket-sized town run-around with the Monkey name and iconic, reborn and ready for life in the 21st-century city. 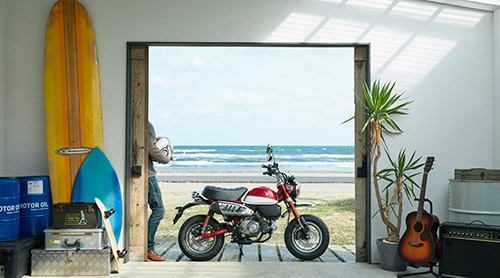 Sure, the Monkey is cute, but its four-speed transmission gives you all the durability, control, and efficiency of a conventional motorcycle.

Nobody can match Honda's reputation for engines, and even though the Monkey may be compact, this single-overhead-cam design is a giant in terms of performance and reliability. The Monkey's power unit is true to its origins, the horizontal SOHC 125cc single-cylinder engine is simple, robust, and tuned to deliver useful about-town performance. Air-cooled, with bore and stroke of 52.4 x 57.9mm and a compression ratio of 9.3:1, fed by PGM-FI, it produces 6.9kW @ 7,000rpm and 11Nm @ 5,250rpm.

With its 5.6L fuel tank and awesome fuel efficiency, the Monkey may be small, but it lets you ride far on every tank.

The Monkey's steel backbone frame has been tuned for a suitable balance between rigidity and supple feel - perfect for the wide variety of conditions the machine is sure to be ridden in. Oval in cross-section, the swingarm echoes the circular design theme that runs through the bike.

Here's a huge improvement over the original Monkey bike: like a top-of-the-line sportbike, the Monkey features an inverted hydraulic fork front suspension for control and road feel. USD front forks wear a premium Alumite finish and are matched by dual rear shocks with 104mm of axle travel. Maximum ground clearance is 160mm.

The Monkey 125 has twin rear shocks. Combined with the fat tyres and cushy seat, they smooth out the roughest pavement in the urban jungle.

The Monkey's single 220mm front disc and 190mm rear provide secure stopping performance, managed by the IMU-based ABS. Our Anti-Lock Braking System (ABS) can be a big help in making controlled stops in less-than-ideal conditions, like on wet pavement or other compromised surfaces. It's a great choice whether youÃ¢â‚¬â„¢re using your new bike as a commuter or just riding it for fun, since it helps you stop with added confidence.

The Monkey's high-aspect-ratio tyres do more than just look cool. They're extraordinarily practical, giving you tons of grip and absorbing bumps or rough road surfaces. Tough and strong, the cast wheels are just what the urban rider needs.

Retro meets modern in the Monkey's instrument cluster. The round housing is totally 1960s, while the display features a speedometer, odometer, tachometer, A&B trip meters, fuel gauge, and indicator for low/high beam. It even greets you when you first start the bike!